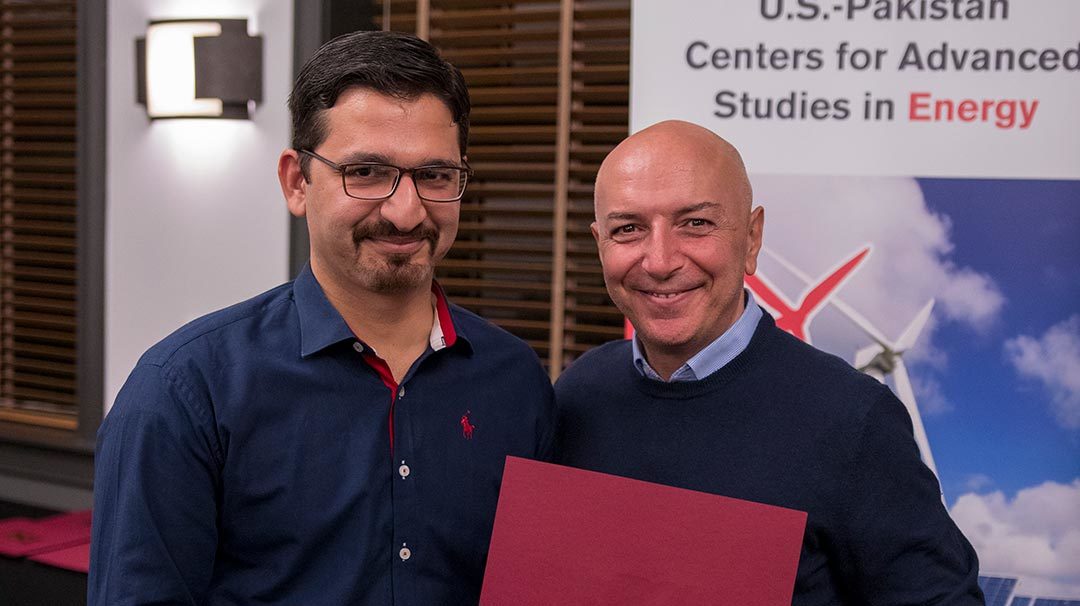 How did you come up with the idea for this project?

The power distribution network in Pakistan extends for thousands of kilometers, stretching from the power grid to the domestic user side in urban and rural areas. Although upgrades have been done from time to time, the overall infrastructure is old and requires frequent repairs. Mainly, once a line undergoes any fault condition, it requires immediate attention from line repair staff. The faults include damage to support towers, line conductors or faults due to external influence such as extreme weather conditions and short circuit between conductors. Out of all such failures in the existing power distribution network, short-circuit faults are the most typical. I work in the field of electrical power, and the recurring problem was the primary driver behind my research project.

Now that you have shared this specific issue in Pakistan’s energy sector, can you elaborate on your research topic?

The clearance of short circuit faults is the duty of local power electric supply companies that are responsible for their respective urban and rural territories. More or less, all the electric supply companies handle such faults based on the fault duration. For instance, two standard divisions of such faults are 1) those cleared within twenty minutes and 2) those extending for more than twenty minutes.

The time duration also indicates the procedure for fault clearance. Faults cleared within twenty minutes are those faults which are non-permanent and occur as a result of events such as a flying bird or tree branch short-circuiting the conductors of the three-conductor (phase) power line. These faults are cleared automatically by a circuit breaker re-closure procedure by the feeder unit deployed at the grid station. Faults exceeding twenty minutes require manual intervention by line repair staff. It is evident from electric supply companies’ recorded data that short circuit non-clearing tripping faults occur frequently and require manual line inspection to trace out short-circuited lines or damaged disc/pin insulators.

The fault detection system that I worked on can localize short circuit faults using a minimum of two nodes between faulted and non-faulted states. The system is deployed where fault tracing is needed, whether on the main feeder length or branches. In an event, the span length closest to the fault location is identified by processing magnetic field signals deployed at respective nodes. An increase in the number of nodes improves the resolution with respect to the distance between faulted and un-faulted span length.

Real-world experiments were performed on dedicated 11kV overhead feeders of the I-10 sector in Islamabad Pakistan. The sensing modules were located at a span of 300 meters (with 100 meters between two consecutive poles), and the sensed data was sent to the data center. The designed algorithm was used to localize the faulted span. To observe real-time data on-site, a Pico Oscilloscope was employed to examine the information on a laptop or PC.

An Arduino device with GSM module and ADC (analog to digital converter) was used to capture data from the sensor and send data to the server using GPRS data sim. The setup has the following features:

How is this project unique in its application?

I have developed an innovative tripping system for overhead power lines based on noncontact magnetic-field measurements. The fault span is located with the magnetic field measured along the transmission line by using highly sensitive, broadband, and a low-cost magneto-resistive magnetic sensor. Further, short circuit faults are located within a few seconds, using a minimum of two nodes between faulted and non-faulted states, thus eliminating efforts for manual inspection by line staff. This project has multiple benefits, including a reduction in power outage times in events of short circuit faults for domestic consumers and preventing the danger of electrification during inspection and retrieval of the punctured pin and disc insulators.

The project is also fully scalable and implementable along the feeder to the consumer end, and it has the potential to be deployed for overhead transmission lines on top of distribution lines.

You talked about the uniqueness of this research. What are some benefits to industry and the overall economy?

An autonomous and portable device has been developed that can be deployed at various nodes of the power distribution network to localize the fault, reduce manual efforts, and decrease black-out timings. The developed system is sustainable in the following ways:

The per-node cost is 25,000 PKR. A practical approach can be installing each node on each of the laterals/branches of the feeder to trace the faulty node. The operation and maintenance costs are low, only 5,000 PKR per month for each of these nodes.

Distribution companies can benefit from the solution by improving their reliability indices, and thus increasing the revenue by cutting down system breakdown time.

The project has significant potential for various power distribution and supply companies and is adaptable to different terrains and weather conditions.

Looking at the results of field experimentation and discussion with the Islamabad Electric Supply Company (IESCO) official, this project has great potential for being commercialized. IESCO and electricity providers across Pakistan have no reliable method to localize the short circuit fault other than manual scouting of the whole area. As mentioned earlier, the commercialization of this project will ensure the fast recovery of faults on 11kv distribution lines and prevent damage to help avoid adverse events. More features can be added to the device, such as current monitoring, peak load time calculations, and failure time monitoring. All this can be monitored through a secure remote server.

How did Arizona State University support you?

First of all, I’m a U.S. exchange program beneficiary under the USPCAS-E project. Having spent sixteen weeks at ASU, I had the opportunity to work with very experienced and professional researchers in my field. I was able to work at ASU’s state-of-the-art labs and also received training on energy policy and entrepreneurship. I learned proposal writing and industry engagement techniques and applied those in the local context. I’m proud to mention that I worked on a joint applied research project with Dr. Bertan Bakkaloglu from ASU that focused on battery health monitoring. It was a rewarding experience for me to work with an IEEE fellow like Dr. Bakkaloglu.

Credit for the remarkable industry collaboration goes to Mr. Ammar Yasser, Corporate Engagement Specialist with Arizona State University. Mr. Yasser helped immensely to get the IESCO officials involved in the fault detection project. He supported us in identifying the right people and accompanied us to several coordination meetings. So overall, ASU helped not just the technical aspects but also with industrial collaboration.