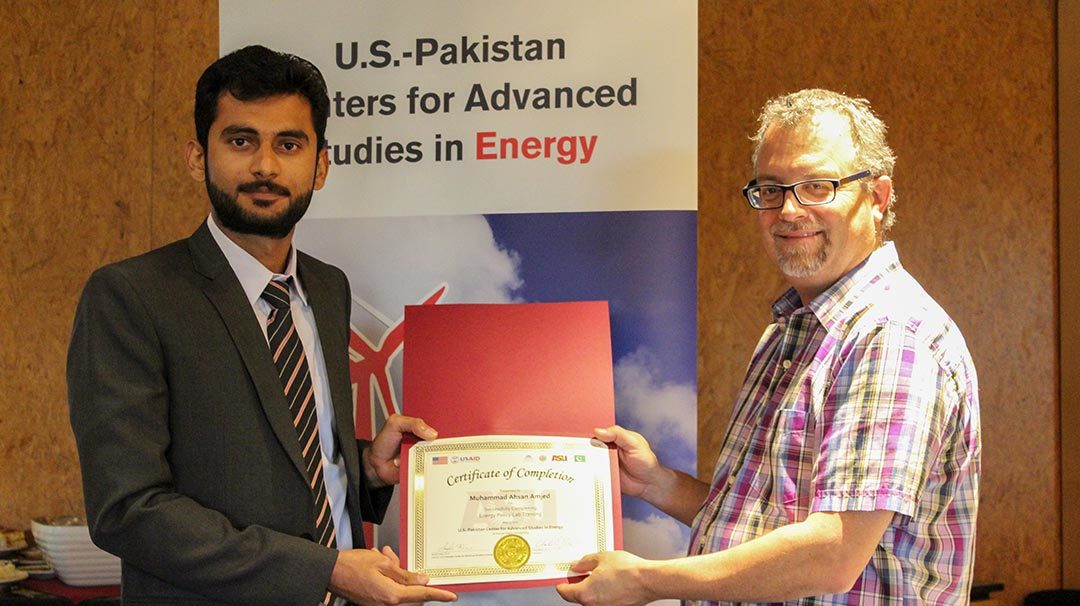 Muhammad Ahsan Amjed is from Rajana, a small town in central Punjab in district Toba Tek Singh. He is currently a Ph.D. student at Ocean University of China (OUC) in Qingdao, China, where he studies energy and environmental engineering. Previously, he worked for the Pakistani oil and gas company Total Engineering Pvt. Ltd., where he worked on renewable energy technologies.

It was a long road to a Ph.D. program, but M. Ahsan says curiosity drove him to pursue engineering.

“My father was a mechanic, and I used to go to his workplace with my elder brother. When I was 12 years old, my brother and I started helping my father at his workshop. At that time, the economic situation of my family wasn’t good.”

It was hard work, but M. Ahsan was intrigued by the technology he saw in the shop.

“Technical stuff in the workshop always made me curious. I wanted to know more; like how an engine works, how it gets energy from fire, et cetera. My curiosity pushed me to study engineering.”

It wasn’t easy because M. Ahsan’s hometown lacked the educational opportunities that would ensure that he had the high marks needed to gain admission to engineering universities.

“Working with my father at the workshop, studying late at night, dealing with limited financial resources, being from an underprivileged area, and an overall lack of guidance made this journey difficult, but sometimes curiosity works positively to achieve dreams.”

M. Ahsan credits his sisters and brothers for supporting him financially and academically to make his dreams possible.

For the last decade, Pakistan has faced serious energy challenges, and this has impeded economic development. M. Ahsan explains that the situation is more difficult in the countryside — places like his hometown. Energy shortages have disproportionately impacted small businesses and industries, which, he explains, have, in turn, created a sharp surge in unemployment for millions of people.

“When I was about to graduate with my undergraduate degree, this was a hot issue in my country, and it changed my dream into a passion,” M. Ahsan explains.

Just after graduation, he learned about a new energy research center with advanced facilities that were being developed by USAID. That caught his attention, and he decided to apply his passion to graduate studies at USPCAS-E at NUST.

Access to a better educational environment and research facilities boosted M. Ahsan’s confidence. As an exchange scholar in the United States, he gained a new perspective on international energy policies and development. His research focused on energy security in Pakistan in the hydropower sector. He studies the ways that trans boundary water tensions can impact Pakistan’s water, food, and energy sectors in the future.

“My research topic was a little unique from others: I worked on the water, food and energy nexus. The transboundary water division between India and Pakistan is always a hot topic on both sides of the border; it’s an issue that could cause a war between two atomic powers if the dispute remains unresolved. Due to growing energy demands, both countries are constructing hydropower stations under limited water flow. My research was to estimate future water flows and power production under different scenarios by using a black box technique of artificial neural networking. My research helped me to understand the sensitivity of that issue better, and that will help in future project designs.”

The entrepreneurial training he received via USPCAS-E was also critical.

“Entrepreneurship training encourages lots of young scholars to start their own businesses in the energy sector. That’s what I’m thinking of for the future, too.”

M. Ahsan hopes that multidisciplinary knowledge and research on renewable energy will help him to create his own business in Pakistan’s energy sector. He knows that the world is moving towards sustainable, clean sources of energy, so his main focus is to target the emerging markets in developing countries like his native Pakistan.

M. Ahsan says it will be an honor to be the first Ph.D. graduate in his hometown.

“Whenever I look back on my life, it seems impossible that I should be here, but my internal curiosity and continuous dissatisfaction with the status quo brought me to this point.”

M. Ahsan knows that many young scholars have benefitted from the USPCAS-E program and that these benefits extend beyond each individual to their families and communities, and Pakistan as a whole.

“I would like to say thanks to USAID and USPCAS-E for supporting me at every stage and making this dream possible. It’s not just the story of one person; it’s the story of one family and one underprivileged small town. Most importantly, it enhanced the mutual relationship of two countries (USA and Pakistan) at a public level and helps Pakistan, from the grassroots level to higher government levels, to mitigate energy challenges.”